I am pleased that the Law Lords have told the Director of Public Prosecutions that he must clarify the position regarding accompanying people to other countries where assisted suicide is legal.

Debbie Purdy is quoted as saying this "gives her her life back" and the relief in her voice gives us all powerful message. She would have travelled alone if necessary and I am so glad she now feels she can ask her husband to travel with her and have him there to the end - if it comes to it.

I personally believe that assisted suicide should be legalised. Of course there should be appropriate controls to ensure that this is a settled desire of the individual without pressure from outside but ultimately we should have the right to die with dignity if that is our choice.

More information from the BBC
Posted by Debra Storr at Thursday, July 30, 2009 No comments:

Under the headline Golf course to make Trump green with envy, The Scotman talks about the Machrihanish Dunes golf course in Mull of Kintyre and the approach taken by its American developer. In contrast to Menie, no conservation group opposed the 200-acre, £4 million course.

There are some choice quotes from the developer, the project architect and SNH.

David Southworth, the American owner said "We have the same colour passport, but other than that we are totally different people."

Paul Kimber, project architect, said: "Some people try and bully their way with money or jobs. We decided to take a different approach and work with ecologists right through the whole project. When we first made some plans we got it completely wrong and had to start again from scratch."

Andrew Campbell, SNH operations manager for Argyll and Bute, lavished praise on the golf course. "The spirit of co-operation and collaboration has made it a really delightful site. We have had no conflict at all on this. We have got a SSSI being managed in an almost perfect way."

He added; "The end result is not only a fantastically challenging golf course but one that is sustainable, resilient and in harmony with the wildlife and landscape – an example that can be followed worldwide."

And Here, Here (but sadly not!)

It does all of course depend on what the SSSI is all about. Some SSSI designations can be compatible with golf. But if the designation is mainly about geomorphology - and Foveran Dunes are one of the largest mobile sand sheets in Europe - then stablising the dunes and grassing them over means that the reason for the designation is lost. Simple to understand really.
Posted by Debra Storr at Wednesday, July 22, 2009 2 comments:

It would be outrageous for families living within and adjacent to the Menie Estate to be forced out of their houses. But the Trump Organisation has talked to Aberdeenshire Council about their using compulsory purchase powers to do just that.

Once I would have dismissed the idea out of hand - compulsory purchase powers have been given to local authorities to use as a last resort in cases where taking a property into public ownership is clearly in the public interest. For Aberdeenshire Council to do this in the interests of a developer would be - to say the least - unusual. Can anyone find a precedent for a council doing such?

So I will be supporting Martin Ford's motion that will be discussed by Aberdeenshire Council on 1st October that says Aberdeenshire will have no part in using compulsory purchase powers in regard to properties on or adjacent to the Menie Estate.

I hope other councillors will see this motion as simply supporting local residents in the normal exercise of their rights as property owners to continue enjoying where they live. But to expect people to negotiate with Trump with the threat of compulsory purchase is unfair. I hope that my councillor colleages will agree we should leave this to the normal processes between developers and landowners. And that the Trump Organisation will also withdraw from asking for such action and show more respect for people who may be neighbours for many years.
Posted by Debra Storr at Wednesday, July 22, 2009 No comments:

Saved from abuse - but doomed to illiteracy

I hope the Scottish Government do not follow this lead. It seems that the proposed changes in Disclosure Scotland are better designed to focus those with regular one to one contact with children and vulnerable adults.

We must remember that most abuse of not "Stranger, Danger".

Thanks for the posting, Sara,
Posted by Debra Storr at Sunday, July 19, 2009 No comments:

David Cameron will not keep the promises of David Davis

David Cameron will not keep the promises of David Davis 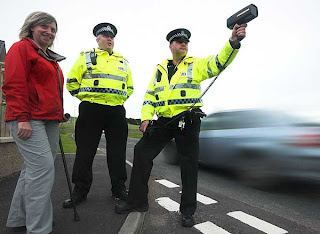 After many complaints about speeding at the north and south of Newburgh, Sergeant Smith, PC Ivancic and I spent part of Saturday with a mobile speed camera at the south of the village and discussing the problem.

We saw many cars obviously putting the anchors on when they say the police vests but even despite this PC Ivancic stopped seven cars in the short period we were there, and one was traveling at 40mph. In June, 10 drivers were caught and will be fined and have points added to their license. The worst case was a car traveling at 52mph.

Amazingly some entering the village who slowed past us, then speeded up sufficiently to trigger the 30mph warning sign just a short distance further.


Speeding is not a victimless crime - Sergeant Smith said the worst part of his job was calling on parents to tell them that their child, pedestrian or young driver, was dead.

With the odds of surviving a collision at 40mpg being less than 1 in 5 and the odds at under 20mpg being better than 4 in 5, ther are good reason for speed limits in all our villages. We all have a choice whether to think about how our actions may impact others - or simply get somewhere fast.

Politics is still in a mess

Our MPs still do not seem to have "got it" regarding how they conduct themselves.

AS citizens, we need to be able to trust all our elected representatives and an important part of that is transparency - and push comes to shove being able to get rid of them. This is a key reason why I believe STV is the best electoral system - it allows choice between candidates of the same party.

But "turkeys don't vote for Xmas" so the correct route is a Citizen's Convention.

Click here to email your MP in less than 3 minutes, and ask them to support a Citizens' convention

Thanks for getting involved,
Posted by Debra Storr at Wednesday, July 15, 2009 No comments:

RSPB letter to the future

I've just signed the RSPB's letter to the Future.

In this time of economic turmoil, it's easy to forget our responsibilities towards a sustainable future - but perhaps we also have an opportunity to review our values.

http://www.rspb.org.uk/lettertothefuture
Posted by Debra Storr at Sunday, July 12, 2009 No comments: