Holyrood: How does the Additional Member system work

Members of the Scottish Parliament are elected by a proportional system know as AMS (Additional Member System).    The official explanation is here but I'm going to try to explain with a minimum of maths and in as simple a way as I can.

Scotland is divided into 8 regions and as well as 73 constituency MSPs being elected, each Region elects 7 list MSPs.    The constituency MSPs are elected by first-past-the-post, the same system used for UK General Elections.   But in addition voters cast a vote against a Party on the Regional List.

The list MSPs in each Region are allocated to adjust the total number of MSPs (constituency and list) to reflect the party share of vote as cast in the Regional (list) ballot.  Sometime people refer to the constituency as the first vote and the list as the second.  I think that confuses.

Now, you'll quickly realise that with only 7 seats to adjust a result, it's pretty likely that the result will only be roughly proportional.  Typically a Region has 8 constituency seats (the pre 1999 Westminster constituencies, but with Orkney and Shetland each having their own MSP) so with 7 List seats, that is a total of 15.  Roughly speaking a party should get a seat if they can gather more than about 6.5% of the vote (100%/15 =6.66%).  So it'll be a bit 'lumpy' and until a party starts getting over the ~6% bar, their votes wont get them a seat even on the list.

But we currently have one party, the SNP running at about 50% for the constituency vote.  That should enable them to make a near clean-sweep of the constituencies.  Most estimates put the actual likely number at 67 to 68.   That would given the 53% of the seats.

Take an average Region (if there is such a thing!).  The SNP win all the 8 constituency seats on 50% of the vote.   That gives them more than their fair share of the seats so they shouldn't be entitled to any of the top up list seats.  These 7 seats then get allocated between the other parties in proportion to the other parties list vote.

We can ignore the SNP as they already have more than 43% of the seats and therefore shouldn't get any extra.

So how do we divide the 7 seats between the others?

Let's just guess at a fair distribution (there is something called Modified D'Hondt that is the mathematical way to do this but I'm not going there).   Let's give Labour 3, Tories 2, and 1 to the Greens.

So who gets the 7th?  The answer is whoever it makes the least difference to the % per MSP figure, which in this case would be Labour - who then get 1 MSP for each 6.25% of the vote.  Not too far off the one seat per 6.5% of the vote we calculated above.

The SNP Regional vote doesn't come into the equation.   These votes have no effect on the number of SNP seats gained.   However, they could have an impact if they voted for one of the other parties.

Imagine that enough SNP voters realised this to mean that instead of 8% of the vote, the Greens got 16% of the vote.

Proportional Representation is supposed to ensure that the seats gains is roughly in proportion to the voting support and eliminate the need for tactical voting.  Some systems are rather better at this than others.

I'm not a great fan of tactical voting : I'd rather people vote according to their beliefs and that this was represented fairly.    But as I've argued in Part 1: Vote for what you believe in

maybe an SNP- Green partnership would, for once, reflect the actual desires of most people.

2011 Election
It so happened that in 2011, the SNP won a clear majority of seats, 69 out of 129, 53% on just 44% - 45% of the vote.   That wasn't particularly outrageous - Labour won 43% of the seats on 33% of the vote in the first elections to the Scottish Parliament in 1999.  But it's worth noting that the system is only roughly proportional.    This lack of proportionality is a result of there being only 7 top up additional members in each Region.  As its perfectly possible for one party to dominate a region, they may win a disproportionate number of constituency seats to the level of popular support - but also get top-up seats from a region where their support is weak.

Since 2011, the constituency level of support for the SNP has grown and now runs as some 49% (March 2015) as demonstrated at the General Election performance of 50% of the vote, winning 56 of the 59 seats.  The SNP are therefore on target to win the vast majority of constituency seats in 2016.

As you can see, the rough proportionality more or less works.  The SNP, on about the same Regional Vote (43%) gains 69 seats.  They are not the same seats : there are more constituency seats and fewer regional top up seats and the decline in the Labour, and LibDem votes is reflected in fewer seats, with the Tories showing a modest increase and the Greens replacing the LibDems as the fourth party of Scottish politics in terms of both seats (8, 6% of seats) and votes (8%).

But with the SNP gaining most of the constituency seats, some have suggested that it would be possible for voters keen to see a strong showing for the pro-independence parties in the Scottish Parliament to game the system.  Those confident that the SNP can more or less, take the bulk of the 73 constituency seats (67 is the figure on a 49% constituency vote), could, the argument goes vote SNP in the constituency vote and for another pro-indy party in the Regional Vote.

The logic runs, that if the SNP win few or no top-up regional seats, then those 43% voting SNP on the list are throwing their vote away and helping the unionist parties to win more top up seats.

So what happens if SNP supporters split their vote between SNP on constituency and Greens for the List?  Let's shift 10% so the SNP are 33% on the Regional List and the Greens are on 18%.

On these figures, the SNP lose a seat overall - but the Greens gain 9 overwhelmingly at the expense of all three unionist parties.    The pro-Indy balance in the Scottish Parliament would be 85 to 44 seats.

Now, a lot can happen between now and the Holyrood elections in 2016, but if you a voter wanting to see a clear pro-Indy majority at Holyrood and are, like many, broadly favorable to both SNP and Green policy (see Hearts and Minds 1: Voting for what you believe), then there is a clear path ahead.

No Party is going to advocate this and indeed you can expect the SNP to be very vocal in asking their supporters not to risk their seats by splitting the vote.   And the Greens officially are unlikely to ask supporters to support the SNP in the constituency vote and Greens on the Regional List.  That's politics - we have a long tradition that is hard to break of parties being unwilling to co-operate outside single issue campaigns.  So it's up to individuals to make their own minds up and tell parties what they want to happen.

The difference between the support for parties in the constituency and Regional List Votes shows we have a remarkably sophisicated electorate.  They have shown themselves willing to support the SNP in constituencies, where they are likely to win.   But the SNP's underlying level of support is lower and the public know it and are willing to promote the plural multi-party politics that the a feature of most of northern Europe.    Let's join them!


I'm of course a partisan in this, so do try out the scenarios for yourself.  The notes below show the data I used from the opinion poll and I'll try to remember to add new polls as they are published.  And you can use the same model I did and see the results.

Hearts and Minds 1: Vote for what you believe in

Vote according to our beliefs, confident in the knowledge that we then get our fair say in how we are governed.

But that simple ideal is currently polluted by fears of our votes not counting, a desire than X shouldn't win, overwhelming the desire to vote for the real preference, etc.

The Greens sister party in England and Wales ran with a strap line on their literature that seemed to resonate : 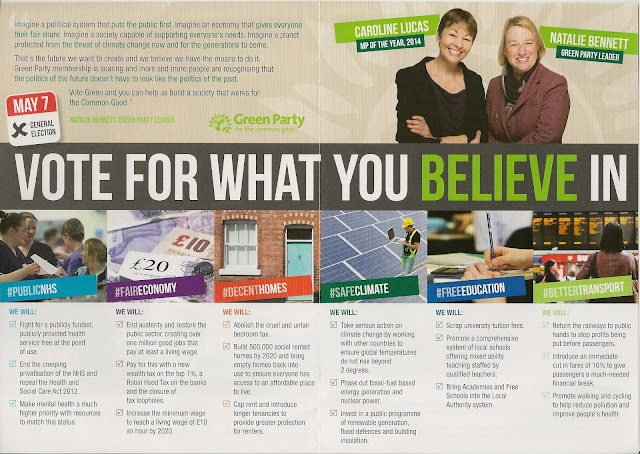 But realistically, people vote on impressions of parties, history, family associations, knowledge of individual candidates (but not half as much as most candidates believe!), and all kinds of other things.  Few sit down and do a line by line comparision of policy.


But there is help.  They aren't by any means perfect but sites like Vote for Policies and Vote Match try to advise individual voters how in a blind (ish!) comparision of their stated preferences match up with parties.

Now it could just be that Greens are rather more inclined to complete such surveys that other parties - or it could be that there is a genuine wish to see a shift away from the neo-liberal concensus that seems to be breaking apart anyway.

Across a range of topics, Greens have a strong showing and Greens or SNP are the most preferred party on every topic.  If - and on some issues (fracking?) - it is a big if, Green and SNP co-operated with each other on issues, arguing out differences, would we really have a government that reflected our collective heart and mind?

Part 2: Gaming PR?  discusses how we could help make that a reality.
Posted by Debra Storr at Monday, May 18, 2015 No comments:

Many nations - a challenge for federalists 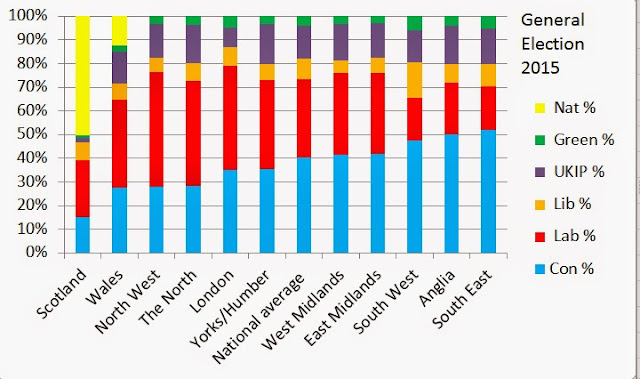 OK.  It's clear that Scotland and England are different but it's a wee bit more complicated than that as the above graph shows.


Would federal solutions help better reflect the aspiration of the different nations and regions?  Possibly but I'm not sure Tories would like to see their natural power base eroded to the southern counties.

Will the SNP work with Plaid, Greens and others who want to see the dispersal of power?   We can only hope but it will require making common cause across parties and some generosity of spirit  to avoid the frustrations of Manchester.

Can we get a new constitutional settlement for all the nations and regions of the UK?  Possibly - there are signs of some interest.

But when they get into the reality of giving away real power, I think Westminster will cling onto every scrap it can.