Trump - the great environmentalist* - and hypocrite.

Today we have the news that Trump has lost his appeal to the UK's Supreme Court in his attempt to halt the development of the Aberdeen Offshore Wind Deployment Centre.  Good.    This development, held up by over two years by Trump's legal games, is not merely an offshore wind farm producing renewable energy but 'will allow offshore wind farm developers and associated supply chain companies to test new designs, prove existing products and receive independent validation and accreditation before commercial deployment.' (Note 1).  This is an important part of the transition of Aberdeen from Oil City to Energy City.

But apart from my natural joy in a defeat to Trump, I want to talk about his hypocrisy.   The Supreme Court judgement says

'TIGC does not dispute that (subject to an argument about the final words of the condition, which I discuss below) condition 7 requires that the development be constructed and operated in accordance with,among others, the environmental statement and the supplementary environmental information statement.' (Note 2)


But TIGC itself ignores disregards and simply bulldozes away Conditions at Menie.

One is in regard to a monitoring group supposed to oversee the development as a whole - known as MEMAG (Menie Environmental Management Advisory Group).    'Aberdeenshire councillors Paul Johnston and Martin Ford have been advised that the Menie Environmental Management Advisory Group (MEMAG) is still not operating, though it is a requirement of the legal agreement associated with the planning permission for a golf resort on the Menie estate.' (Note 3)

The operation of MEMAG is not just a planning condition; it is part of the legal agreement underpinning the development at Menie. (Note 4)

But here's the rub :

1.  Trump has demonstrated that his deep pockets means he is willing to take spurious arguments all the way to the Supreme Court and frankly Aberdeenshire Council hasn't such deep pockets. 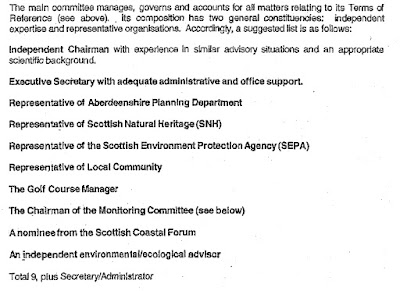 2. Aberdeenshire Council must have known that MEMAG wasn't operating : I've correspondance from mid 2012 when it still existed and more from mid 2013 when it wasn't.  And they have a representative on MEMAG.

Well over two years to spot there is a problem is not exactly careful monitoring of this sensitive development.

Note 4: Extract from Legal Agreement between Aberdeenshire Council and Trump:

7. MEMAG
7.1 Prior to the carrying out of the masterplanning exercise required in terms of Condition 3(i) of the Planning Permission, the Developer shall establish MEMAG in consultation with the Council.
7.2 The remit of MEMAG shall be to provide advice to the Developer and the Council in respect of:
a) "best practice" environmental management and operation;
b) monitoring of the environment including ecology;
c) the minimisation of unanticipated adverse changes in addition to those already recognised in the Environmental Impact Assessment;
d) Full compliance with the relevant conditions attached to the Planning Permission and related reserved matters approvals.
7.3 The membership and structure of MEMAG shall be as set out in Appendix 6-6 of the Environmental Statement, the terms of which are set out in Schedule 3 of this Agreement.
7.4 The policy committee of MEMAG shall agree the locus and maximum estimated costs of their operations and activities, including the cost of administrative and secretarial support on a three year rolling basis.
7.5 For the avoidance of doubt, MEMAG shall operate as an advisory body only and shall not have the power to veto any proposal or action proposed by the Developer or the Council;
7.6 The Council, as planning authority, shall remain responsible for the statutory development management of the Site
7.7 The Developer shall be responsible for the total costs of MEMAG's operations and activities including the cost of administrative support and any professional or other fees and outlays incurred by MEMAG.
Posted by Debra Storr at Wednesday, December 16, 2015 No comments:

Who is the National Disgrace now? 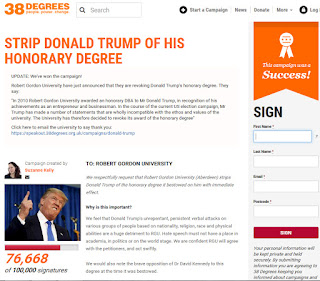 Suzanne Kelly who has been a tireless opponent of Trump from almost the earliest days, launched two petitions.

One, launched 10 days ago, asked that Robert Gordon University revoke the honorary doctorate he was awarded in 2010.

Today RGU revoked his doctorate saying that 'In the course of the current US election campaign, Mr Trump has made a number of statements that are wholly incompatible with the ethos and values of the univeristy.'

I still don't think Trump should have been awarded the degree : it was a shameful act of abasement to this bully and in 2010 it was clear that his US business practices were to be applied here, notably his attempts to gain control of the properties owned by the Menie residents.   Does Sir Ian Wood have a few questions to answer about his role in awarding this degree?   I proposed Sir Ian for a Dick of the Year Award in 2010: I don't see any reason to change my mind.

But that wasn't the only dismissal for Trump today.  At long last, the Scottish Government removed Trump from his role as Global Scot.  The amazing Andy Wightman has been following calls for Trump's removal from this business ambassador role for many years.  His tenacity will be helpful when (and I say when not if) he is elected as a Green MSP for Lothians. 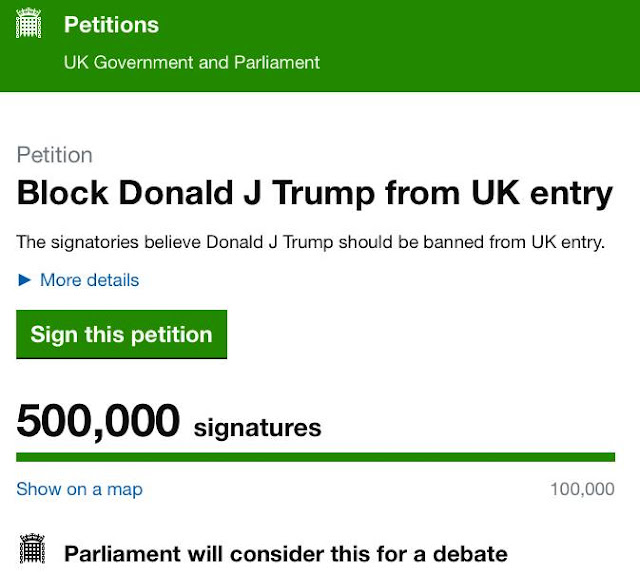 But we all still risk meeting Trump either at Menie or Turnberry and I really would rather not.  I've been near him and his henchmen enough often enough to know he doesn't improve on acquaintance.

Suzanne launched another petition yesterday and in just 24 hours, it's gathered a quarter of a million signatures - and rising.

His hate filled remarks to women, non-whites, and non-Christians and his mockery of a disabled journalist show a remarkable lack of empathy.  Some therapists believe he suffers from Narcissistic Personality Disorder.

One explains his behaviour:

'He’s applying for the greatest job in the land, the greatest task of which is to serve, but there’s nothing about the man that is service-oriented. He’s only serving himself.'

Some in Scotland spotted the danger of this self serving bully a decade ago. The rest are learning fast.

Let's do what we can to undermine his ability to bully in the US and Scotland and I can think of no better way than bracketing him with other who spread hatred.
Meanwhile: Thank you Suzanne.

Update: the petition passed the half million mark in the early hours of 11th December 2015.  It currently holds the record for both the speed of reaching 100,000 signatures and the most signatures on the government petitions site.
Posted by Debra Storr at Wednesday, December 09, 2015 1 comment: