Hung parliaments and fitness to govern

In a time when Governments of  all colours have messed up and thrown us into an economic mess, a little humility would go a long way.  Whatever hand in terms of seats, is what the politicians will have to deal with.

So what should we be asking them about hung parliaments?

To those who have said a hung parliament would be "bad"
Does that mean you won't work with others for the good of the country?  Why not?

To those that countenance a hung parliament,
How detailed a programme for government would you seek to negotiate and when can we expect the next general election?

More at http://www.38degrees.org.uk/page/speakout/hungparliamentpr
Posted by Debra Storr at Wednesday, April 28, 2010 No comments:

It was truly a delight to have Patrick Harvie MSP visit the Sue Edwards' Gordon campaign yesterday..  It was just a busy day that I've not had a chance to write it up until now. 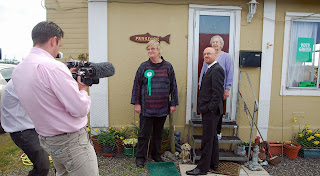 We started with a visit to the lovely Molly Forbes who made us all most welcome (home-made blueberry muffins, cake and biscuits) and tolerated another round of media circus very patiently.  The good news for her and other residents that are threatened with compulsory purchase if Trump's plans are to be realised, is that 64% of Scots are now against the resort - see press release for details.

We then called into Ellon and then had a most interesting visit to Pitmedden Udny and Tarves Community Composting.  Sue, of course, took the quality control of the finished composted garden waste very seriously and Patrick couldn't resist a closer look at one of the toys.


Thanks to Vicki, Dave and Chris for giving their time to show us around and to discuss the issues.
Posted by Debra Storr at Tuesday, April 27, 2010 1 comment:

I keep looking at the Met office maps.

One maps shows satelite imagery of teh volanic ash plume.

Another shows the no-fly zone predictions

So just how dangerous is it to fly though this ash?  This news report from the BBC gives some details.

If one airliner in a hundred has total engine failure due to volcanic ash, then that seems to me to be a pretty big risk.  The risk not only impacts the crew and passengers but in crowded Europe, the risk of a crash on an urban area can not be ignored.

Would you get on a plane if you thought there was a one in a hundred chance of engine failure.  I wouldn't.
Posted by Debra Storr at Tuesday, April 20, 2010 2 comments:

Which bit of "No" don't you understand

Just which bit of No doesn't Tom Smith understand.

People very clealy wanted a green space and the arts centre. When asked what they would like to see in the City Square project the answers were

The Northern Lights Arts Centre that Peacock are spearheading deliver these top four.

Let's just get on with it.

If Sir Ian Wood wants to help the City, then I'd suggest he focus his efforts into moving local industry faster to the renewables sector. As he has pointed out, we need to do this soon if Aberdeen is to become a world class centre for off shore renewables.

I think he is a better businessman than he is a town planner.

I don't know when ASCEF next meets - their website is very coy about this.  But Aberdeen City Council will apparently discuss the issue on 19th May.  I suggest that people contact City councillors to ensure that the clear view of the public is fully taken into account.

No should mean No.
Posted by Debra Storr at Tuesday, April 13, 2010 No comments:

One thing I have always believed is that we must move to a system of electing our representatives that gives voters more power.  And that means the single transferable vote (STV) - the best system to maximise voter power (although like any system, it has its faults).

This video explains just how crazy the current First Past The Post system is - and ties the issue firmly to the laziness and arrogance of some MPs. Thank you to http://www.voterpower.org.uk/ and the New Economics Foundation.

If you recognise the problem, please don't vote for any Party that will not commit to introducing STV - so that leaves Greens, LibDems and SNP.

Choices in thsi General Election for some may be hard.  Neither Labour nor the Tories look attractive and I have lost faith in the LibDems.

What I do this time is clear,  I have the opportunity to vote for Sue Edwards who is a woman of principle with a big heart.   It's interesting watching someone new to politics grapple with doorsteps, hustings etc.  Sue takes it all in her stride and stays beautifully herself.

There are big issues.  Clearly "business as usual" won't be enough to solve problems with the economy, the environment and help people live high quality lives.  And I worry that people will vote out of fear of "the other" rather than hope to create a future they really want.

Just as a matter of interest, try looking at the policies at http://voteforpolicies.org.uk/  and see how your views align to the various parties.  The result are more than interesting.  You might surprise yourself!
Posted by Debra Storr at Tuesday, April 06, 2010 4 comments:

The campaign for a Robin Hood Tax (a small tax on financial transactions) has launched a new video. Please click here and watch it.