How popular are Green policies?

Since the middle of last year, the Green parties have been growing with an explosion of members aroudn the time of the IndyRef in Scotland.  And still they come.

We've always known that, at least amongst people who like that kind of thing, 'blind shopping' of Green policies against other parties has produced very favorable results.    But until now, the Scottish Greens have been lumped in with our sister party in England and Wales (OK - but we are different) and the SNP shamefully hasn't tended to be included at all.

www.votematch.org/ agreed to include Scottish Greens for their new version due to go live in March.  Fantastic. We are really looking forward to the launch.  The process of being included was made very easy.

But www.voteforpolicies.org.uk, after first being keen to include us, then decided that as we didn't have an MP or MEP in Scotland, we wouldn't qualify.  Rachel Waugh and I made a bit of a fuss on Facebook and lots of others joined in by email and on twitter - and within hours, a decision that look immoveable through January and most of February, was reversed : they did #invitethegreens.

But how would we Greens fare now?

Well, not bad. See that nice big patch of Green.  That's us.  It's a small sample so far - but very promising. 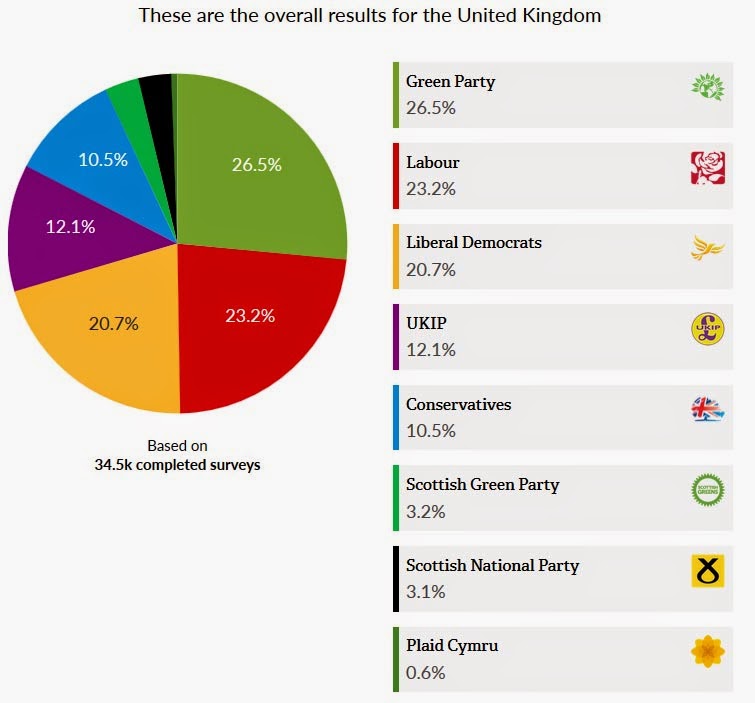 It's difficult to compare the others as VoteforPolicies 2010 didn't include the SNP. But if I were UKIP or the Tories, I'd be worried: the purple and blue areas are shrinking.

No analysis of the situation across Scotland is yet available (I've asked) but on the UK scale, the picture is very interesting indeed.

There is the Green Party of England and Wales, sitting at the top of the leaderboard on 26.5% of the UK national vote - and with the Scottish Greens 3.2%, the Green total is 29.7%.  WOW!

On a UK national basis - and therefore a Scottish basis as neither party stands candidates outside Scotland - the Scottish Greens, narrowly defeat the mighty SNP.  WOW!

So we have a serious challenge on our hands.

We have to convert that good will towards our policies into a belief that those policies can be implemented and that it is worth voting Green to get them implemented.

See you on the doorstep.
We've work to do.
We've seats to win.

It might take a while but we will win.  And so will the country.
Posted by Debra Storr at Saturday, February 21, 2015