I've written to the architects in charge of the masterplanning exercise at Menie asking whether they will be preparing one masterplan or two.

Last week, Aberdeenshire Council failed to rule out the use of compulsory purchase orders for five properties at Menie leaving uncertainty for both residents and the Trump Organisation.

But with the residents determined not to sell willingly and all indications still being that councillors believe that using compulsory purchase powers for private profit would be wrong, Gareth Hoskins Associates now have a problem.  Will the realistic boundaries be the original boundaries or can they can include the disputed lands belonging to my constituents?  Or should he simply prepare two?

A masterplan was a key requirement of the planning permission granted by Scottish Ministers and the intent was for a masterplan to be agreed before detailed planning permissions can be lodged and any development can start.  But until the threat of CPOs is wthdrawn completely, no-one can know where the bounds of the masterplan should be.  If my constituents properties are included in the masterplan, it may never be deliverable and the Trump Organisations noise about starting in November may simply be more Trump noise - they don't usually stick to any timetable they advertise. 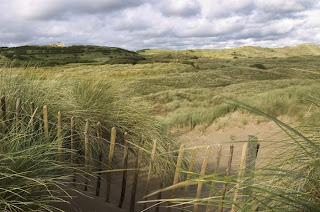 Note: the only current application at Menie is APP/2009/2479 Marram Grass Planting, Preparatory Earthworks and Chestnut Pale Fencing on the Inner Dunes at Menie Links
which as chestnut pale fencing has been erected is part retrospective.

Thanks to Dan Phillips for permission to use the photo
Posted by Debra Storr at Thursday, October 08, 2009

This blog is published by Debra Storr using facilities provided free of charge at www.blogger.com.
The main posts are my opinions: comments are the responsibility of the posters of the comments.

Occasionally, I invite Guest Blogs : their opinions are, of course, their own.