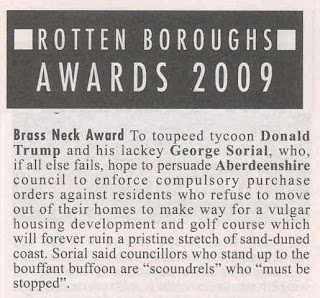 
"toupeed tycoon Donald Trump and his lackey George Sorial" for asking Aberdeenshire Council to use CPOs to remove local residents "to make way for a vulgar housing development and golf course which will forever ruin a pristine stretch of sand-duned coast".


Particular congratulations to George for featuring - part of the title of this blog is his gift to me.  Don't worry, Neil, Sarah, Ann, etc - I recognise your contribution.

Donald Trump will have been disappointed by his 98th place in the BBC's "Most Annoying People of 2009" awards also given in recognition of his demands for CPOs.


"Money bags The billionaire Donald Trump attracted the ire of conservationists when he set his sights on remote Aberdeenshire in Scotland. In 2006 he announced plans to build a 2,000-acre, $1bn golf course and luxury resort, billed as the "great­est" in the world, on a coastline featuring sand dunes protected as a Site of Special Scientific Interest. He claimed that "environmentalists supported us" and "the locals were ecstatic", but faced opposition from the RSPB and the local council, which initially rebuffed his advances. After much legal wrangling (and a personal intervention by the First Minister of Scotland, Alex Salmond), Trump gained planning permission in October."


The decision to allow the development was awarded a Pock Mark for Worst Planning Decision in Scottish Architecture's 2008 Carbuncle Awards.

Is there a trend here?

Will Donald ever get back to the dizzy heights of when in 2007, the Trump National Golf Club in Bedminster, N.J., was the first recipient of the Metropolitan Golf Association Environmental Award (best on six criteria from around 280 MGA members)?
Posted by Debra Storr at Saturday, January 09, 2010