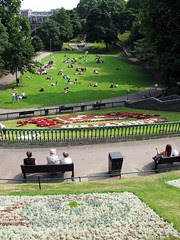 It is with some trepidation that I comments on this - but as folk in the City had no inhibitions on commenting on Menie, I'll put in my tuppenth-worth.

I have carefully looked at all the material on The City Square website and also the Peacock Arts Proposals.  A useful comparison can be found at CompareTheSquare.  You may also be interested to read the Supplementary Planning Guidance Aberdeen City Council has already agreed for Bon Accord Quarter and put this in the overall context of the City Centre.  The Masterplan proposals had over 70% approval ratings.

My initial reaction to the Ian Wood suggestion for UTG was fairly open minded with some concern that this was another grand project.  However  I recognise that Union Terrace Gardens are under-used but the Peacosk Arts proposals seemed set to take care of that.

The actual details of the Ian Wood proposals are rather thin.  £50m from Sir Ian (presumably his investment not a gift).  But what other funds would be needed and from where.  The City Square website says it would not be taken from public services.  I assume that means no on-going revenue commitment but it leaves open the question of capital.  And just what does it consist of?  Parking, shops, public art, public open space.  My other job is in the IT industry and we have a term for stuff that sounds like a good idea but doesn't exist - vapourware.

And how much does Aberdeen need more car parking and shopping with Union Square just opened and the general proposals in Bon Accord?  I also worry that the Union Square to Bon Accord axis is killing the shops on Union Street and George St.

I think that the way forward is Peacock Arts - This Time, This Place, This Generation - delivered.

Please do complete the CitySquare consultation questionnaire and if you want to save Union Terrace Gardens and the new Arts Centre, also complete the online petition.  I was the 4276th signatory.
Posted by Debra Storr at Monday, January 11, 2010